In Darks Souls 3 it is important for a faith build to be able to rely on their trusty talisman. Talismans are some the best tools for any Ashen one exploring the world of Darks Souls 3 that intends to take advantage of miracles. The reason to use a talisman over a chime or any other catalysts is that talismans casts quickly and grants the user poise.

In Dark Souls poise is equivalent to hyper armor in fighting games. If the player uses a move that has hyper armor or poise the player won’t be interrupted if hit by a stun move or attack. While your character still takes damage, they be able to finish casting their miracle. All the talismans on this list have a weapon art that gives the player poise while casting and using the weapon art.

This is helpful when using miracles because if you make a mistake and get hit while casting, you will still be able to deal damage back which is known as trading. The same can also be done with buffing your weapon, or maybe even heal as long as the strike isn’t strong enough to kill you or from a two-yard-long fantasy sword you’ll be fine.

Still I need to clarify that it should not be anyone’s goal to trade or get hit in exchange for casting a miracle. A Talismans poise just gives the player more options in tight situations and covers mistakes.

This makes talismans a strong choice if you want to use offensive miracles that throw lighting at your enemies or you want to buff your weapon in in the middle of combat. However, chimes have higher spell buffs. This means that if you only want to heal and apply buffs outside of combat maybe talismans aren’t the tool for you. With all that being said let’s rank the talismans to make your choice easier. 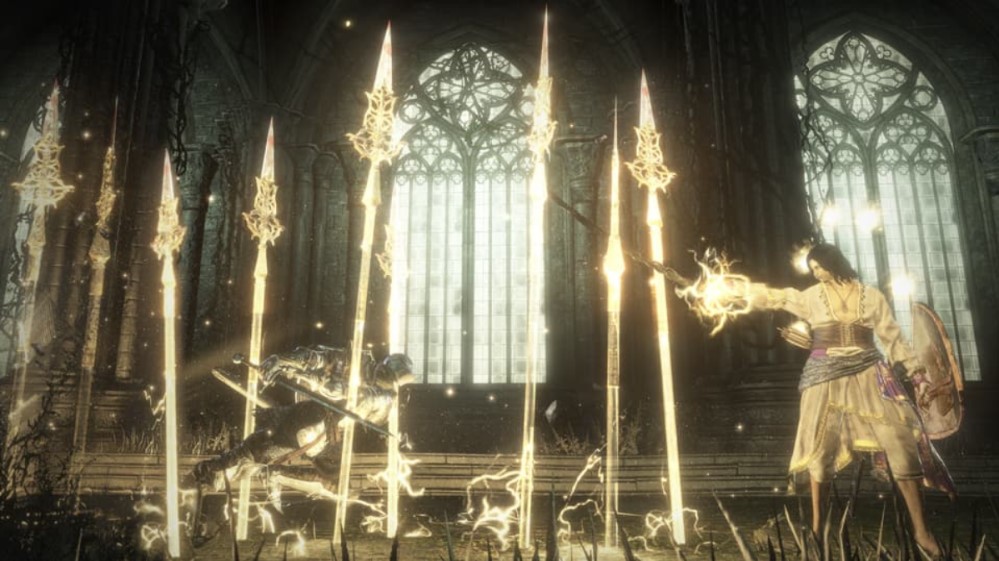 The magic of the gods are weapons of the church

Beating out the white hair talisman (the one without poise) for the highest spot on this list is the Saint’s Talisman. The Saint’s Talisman is an ivory talisman given to women clerics. Since you can find one in the proximity of Irina it is likely that it may have been her’s before she either discarded or lost it. I mean she’s blind so don’t think to poorly of her for doing so.

The Saint’s Talisman requires the player to have 4 strength and 15 faith to use. numbers that shouldn’t be an issue. The saint talisman gets A scaling in faith.

The Saint’s Talisman is an option for someone who is looking to deal a high amount of damage with miracles. With the Saint’s Talisman tanking or trading hit won’t be much of an option because it has that lowest poise of all the talismans on this list. Someone those who uses this tool will be more focused in finding openings in combat to blast their enemies. This makes it more usable than a chime in combat it is still less reliable than the following talismans.

The Saint Talisman can be obtained in the sewer in the Undead Settlement. It can be found on a corpse guarded by some rats. 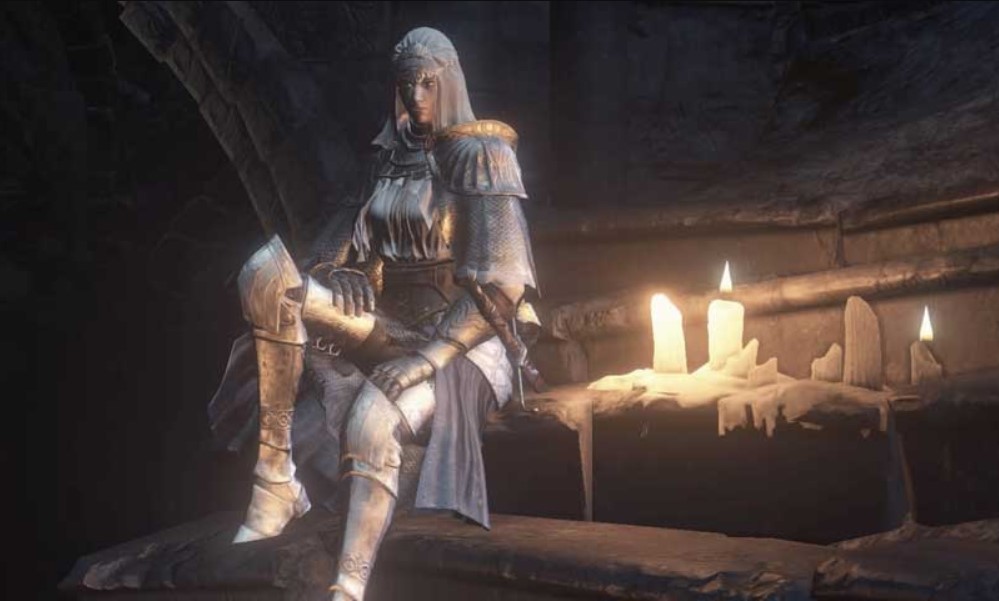 The Sunless Talisman the player needs 4 strength and 24 intelligence to use. This tool has weird scaling with a D in strength, and A in both intelligence and faith when upgraded.

The Sunless Talisman is useful to create unique builds that focus on dark miracles rather than standard ones. If you want to do this expect to use a different talisman for most of the game as both the Sunless Talisman and dark miracles can only be obtained fairly late in the game. It may be a good idea to just play as a pyromancer then switch. New game plus is also a good bet if you want to do an only dark miracle run. Because the player invests in intelligence and faith evenly to get the most out of this catalysis, they could use other kinds of spells and staffs as well to fill out a dark theme.

The player can get this talisman by either killing Sirris of the sunless realm or going through her questline. If you want to be a part of the Blade of the Darkmoon covenant I recommend doing her quest. 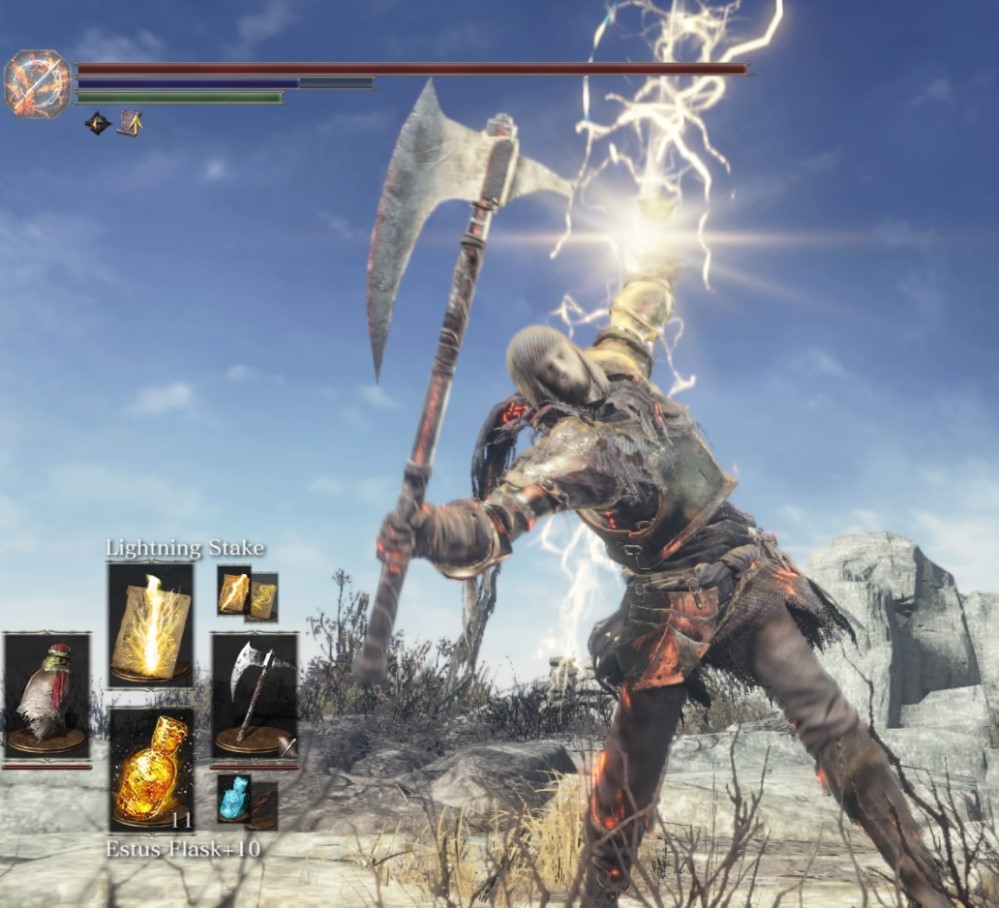 This talisman is imbedded with such unwavering faith that the user is guaranteed to fire off lighting as if they were Zeus. The sunlight talisman is said to be the personal talisman of the knight of sunlight, Solaire of Astora. Solaire a fan favorite NPC from the first game is intrinsically linked to the sunlight covenant. While he is not in the game his iconic armor with the sun painted across its chest can be worn in the game. Before Dark Souls 3 and the appearance of the Nameless King, Solaire was predicted to be Gwyn’s son.

To use this weapon the player needs a strength stat of 4 and a faith stat of 14. When upgraded it gets A scaling in faith.

This a great talisman for PVP just don’t expect a damage output as high as the rest of the talismans. It is still very reliable despite low damage output. This works well with the lighting stake miracle where the player stabs a lightning bolt into the ground creating attacking all around them. This miracle does huge damage and is prefect for trading. Plus, it looks really cool

This talisman is located in Farrow keep. It can be found in the swamp just before the player third fire you need to extinguish to open the door to the abyss watchers. It will be next to the estus soup. 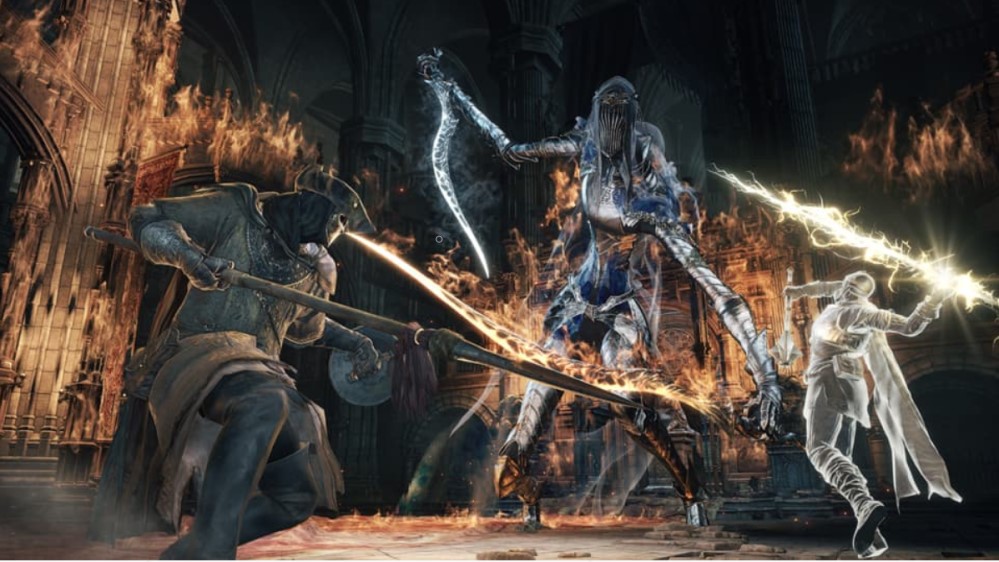 Really? The generic canvas talisman is the 2nd of the list. Actually, the argument can be made for it to be even higher. The talisman is the basic catalyst the is used to perform the miracles of the gods.

To use the talisman the player once again needs 4 strength and a mere 10 in faith. After the first upgrade this weapon get A scaling in faith.

The talisman has a decent poise and high damage potential. It is a very balanced catalyst. While it is outshined by the sunlight and next talisman in some PVP scenarios it is still a strong option and what I recommend for the players is playing offline. If you want to hit 60 in faith and don’t care about a little poise go with this talisman

The player can either start with this catalysis if they begin the game as the herald class, or simply buy is from the shine maiden in Firelink shine without any extra steps. 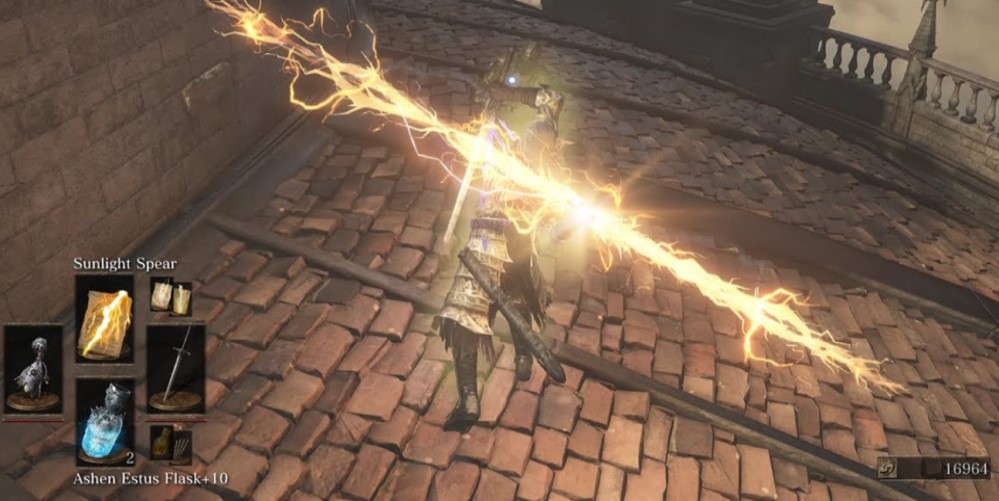 The canvas talisman was likely the tool of a paladin one. Evidence for this is not in the item description but from the fact that the canvas talisman can only be purchased from the shine maiden after giving her the ashes of a paladin. While this alone isn’t proof it should be noted that paladins are usually warriors of faith that use magic to support their physical prowess.

Again the 4 strength is needed to use this catalyst, it also requires 14 faith to use. After one upgrade it gets A scaling in faith.

The Canvas Talisman has slightly less power than the plain talisman when the player has very high faith but makes up for it with slightly more poise. Overall best and most balanced. You should use this unless they want an extreme that a different talisman offers such as very high poise or better damage output at very high levels of faith. If you continuously lose fights by a sliver of health maybe grab something with more power.

As mentioned before this talisman can be purchased from the shine maiden at Firelink shine after giving her the paladins ashes. The Paladins ashes can be found in the Cathedral of the Deep.